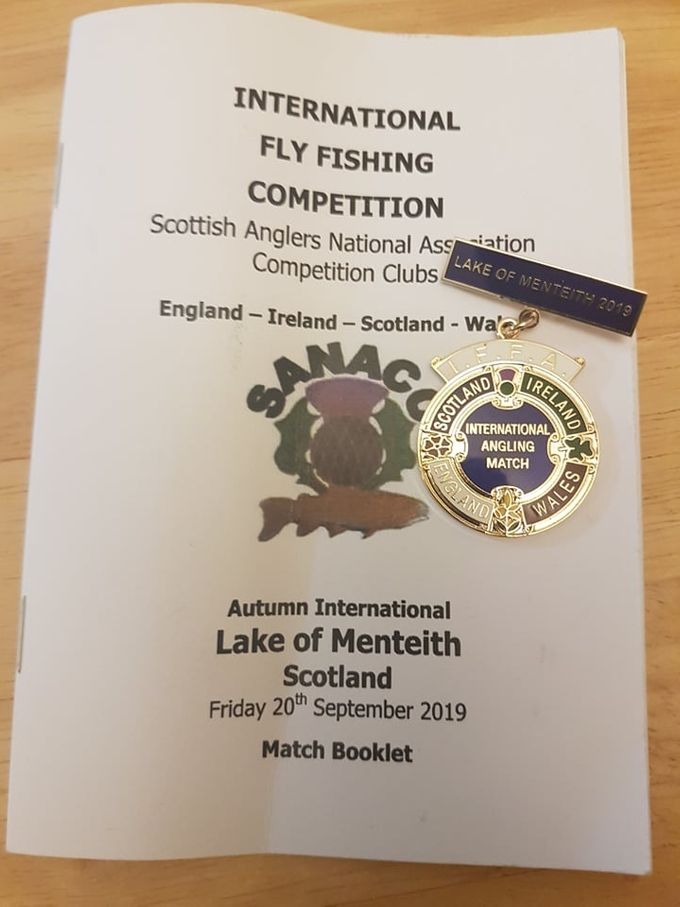 AWAY GOLD AT LAST 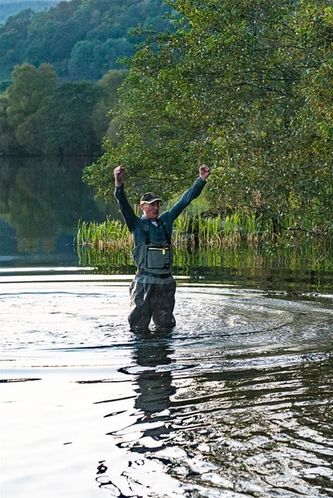 Away Gold at Last.

September 15th saw the team depart in the early hours of Sunday morning to Scotland for the Autumn International on the Lake of Menteith. In October 2018 the Team was picked for this match. As a result of the selection deliberations an experienced Team was chosen who had a lot of International experience. Included in this were the two previous Gold medal winning Captain’s, Ireland’s most capped Irish anglers and a Brown Bowl Winner among the 14. The Captain, Martin McGorian was chosen for many reasons. He is a very determined and passionate angler and he is no stranger to competitive angling.

The preparation began in November 2018 when we held Our first meeting. It was discussed that we had the opportunity to chase down an away win with the Team personnel we had and this then became our only target.

Fast forwarding to 2019 and the Team worked away on preparation for the match. We arrived at Menteith on Monday morning and had heard how well it had fished on Saturday for the Scottish National Final. The lake did not disappoint and all of the Team had caught well during practice on Monday. With a couple of methods working well we continued to refine and adapt these as the week progressed. We were fortunate that we had many fly tiers within the ranks and each day everyone was armed with the required patterns plus a few patterns that required further testing. We came off the lake early on the Thursday afternoon our last practice day, happy with what we were doing and to get the final preparations done early and allow the Guys a chance to relax a little before match day.

Match Day Preparations completed we set off to the lake and arrived at 8.15. The sun started to burn off the early morning fog and in no time revealed a bright blue sky and a lake that resembled a mirror. Not what any team wanted, especially the Irish Team as we had no practice during the the week in such conditions. But we did practice during the week as if it was going to be flat on the final and the team worked hard perfecting methods. Which ranged from Di5 and boobies to floaters and drys. Each area fished slightly different and you needed to adapt lines and flies and indeed retrieveS to continually meet fish 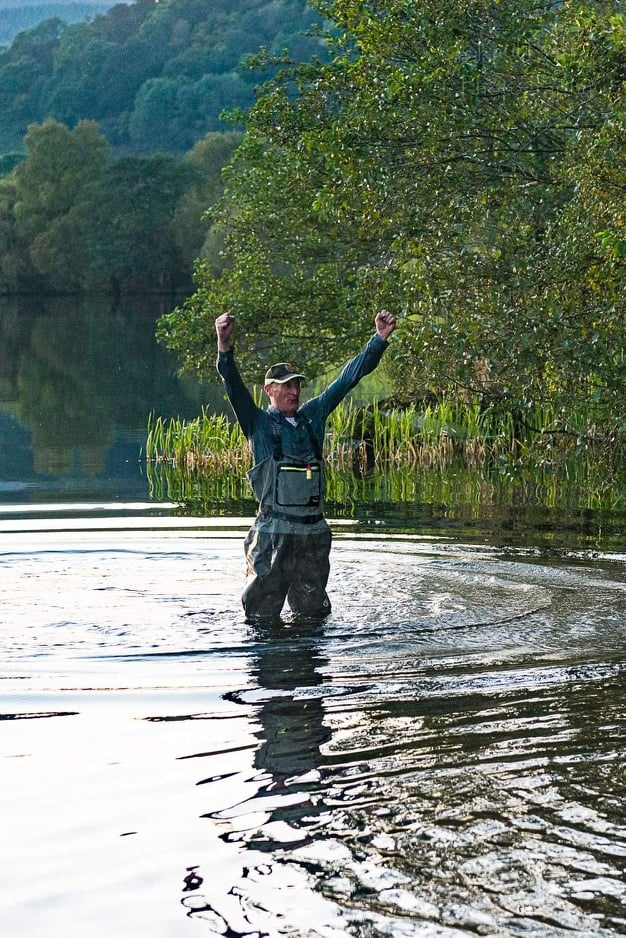 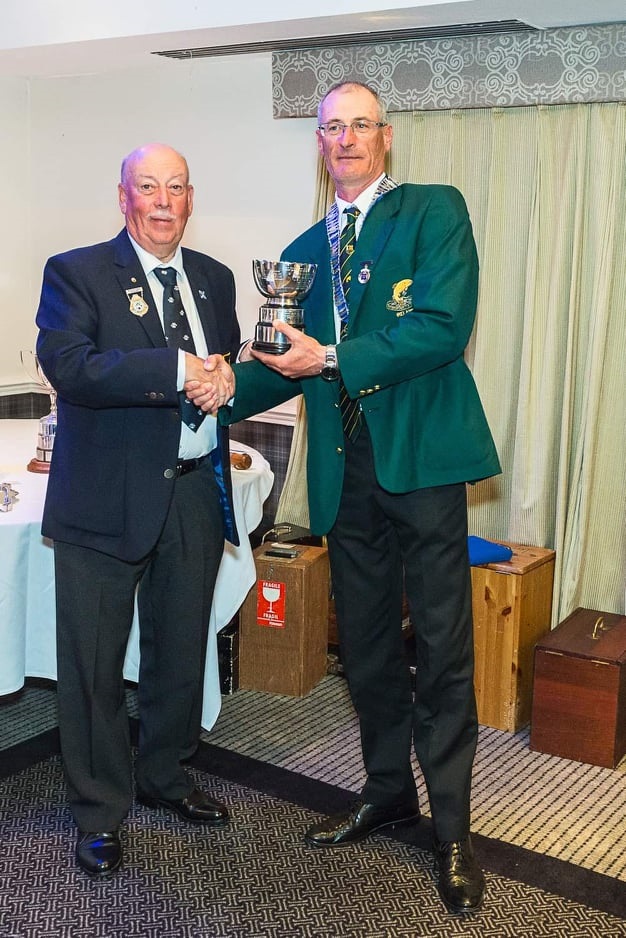 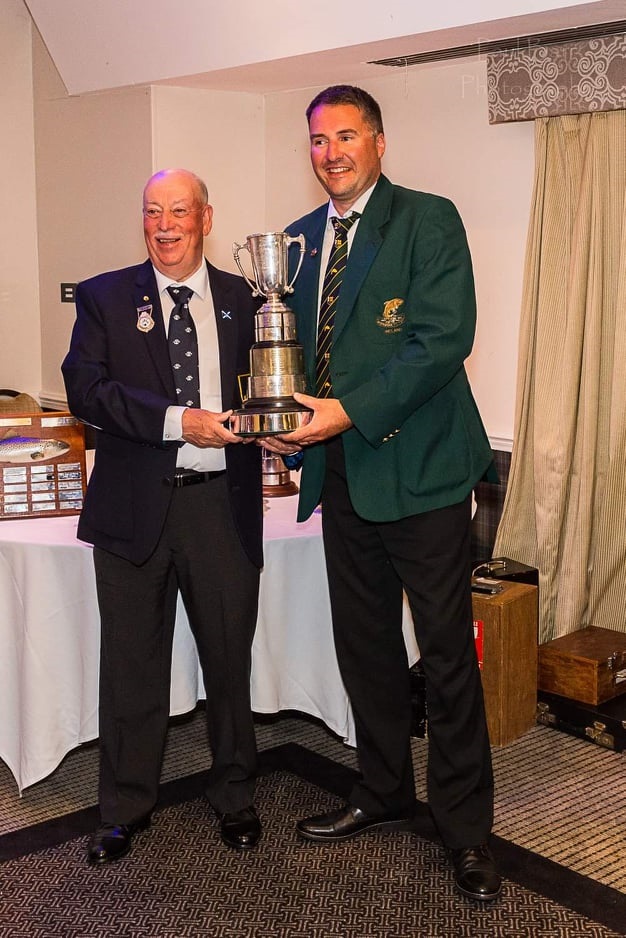 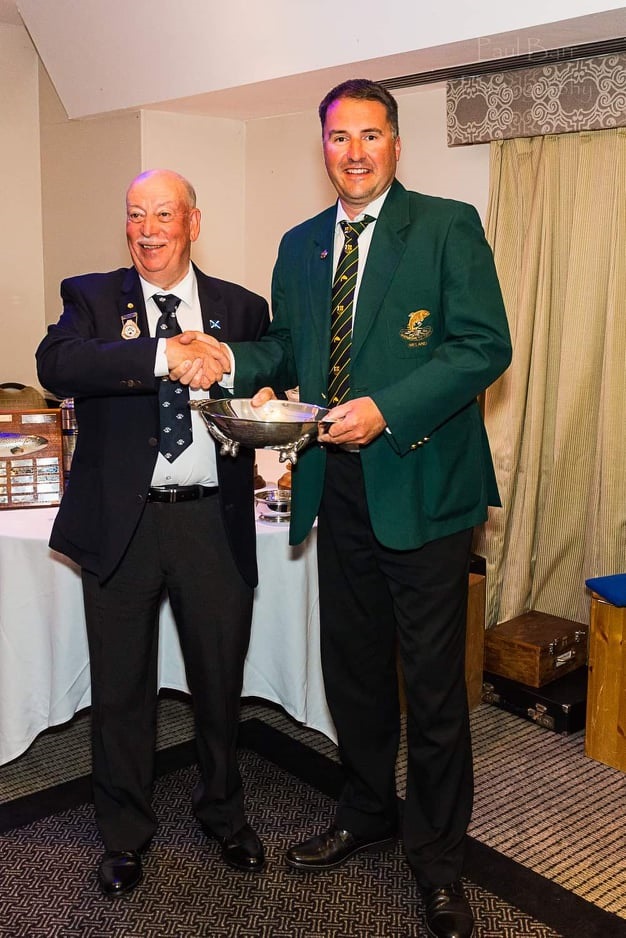 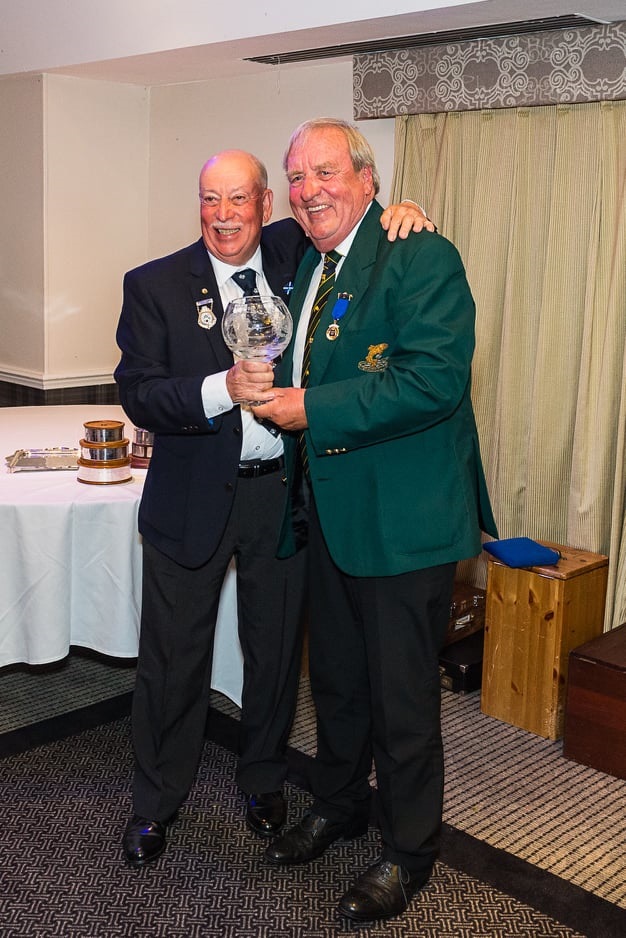 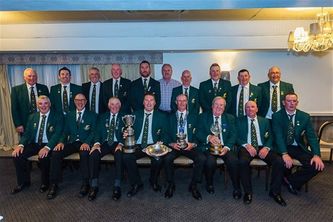 The International matches have many fine traditions and the parade to the Lake is one of these. It starts the nerves jangling and stands the hair up on the back of Your neck like you wouldn’t believe possible. Formalities over a quick Team chat and good luck wishes exchanged the Team headed to the Boats. It was over to the Guy’s now to do their best. I watched from the shore interested to see where the armada of boats were headed.

Once the boats are gone the respective team managers all have a chat and reveal how the practice had gone and what the winning total might be. In the conditions I thought that 100 fish could do it. As practice days had indicated all Teams seemed to be doing well and I felt this was going to be an extremely close match where a fish or two could make a huge difference in terms of the result. I fished the Officials match during the day and couldn’t believe the conditions, hot and calm. I stayed away from the competition boats. I spent a lovely day in the company of Ian Wilson of the Scottish Committee and we agreed at one point that we didn’t have to fish the 8 hour match such were the conditions. Really stamina and energy sapping conditions if there ever were!. Ashore at 5 and the weigh in for the Officials match was done. Victory went To Michael Callaghan, Ireland with 5 fish in the process pipping Paul Edward of Wales by 0.1 of an ounce. A tight result. Glad to see that My two days spent with Michael paid off as He won the Officials match for the first time ever. Chatting again amongst the Team Managers revealed that Ireland seemed to be doing well. Fingers crossed time. 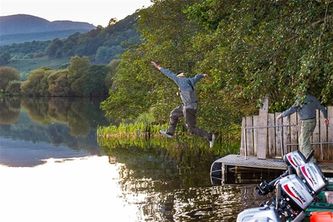 At 5.50pm the first boats started coming ashore. The first Irish Angler I met was the Captain, Martin McGorian who had played a true Captain’s part and caught 9 fish. One by one I gathered up the Team total and after some quick mental maths determined that we had a very respectable 109 fish. It is customary for the Team Managers to exchange their respective Team tally’s. It then became apparent that we had the most fish a remarkable result and showed the true grit and determination of the team. I urged caution as we had been here before in 2016 and came second! The weigh in was completed and after the scores were tallied. Our hard work and relentless effort paid off , we had won by a little over 8 lbs and were pushed all the way by Wales on 104 fish in second. I mentioned earlier about the fine traditions at the International matches the other Teams and Managers offered their congratulations in wonderful display of sportsmanship. Once this was done Captain Martin decided to conserve the water supplies at the Hotel and have a dip in the Lake instead. There isn’t a stag above the rolling hills above Menteith that could reach the heights that Martin reached. He had been threatened with getting wet if we won and He decided when man handled to the water to complete a most spectacular jump which was recorded on camera for posterity. Another outstanding result on the day was Arden Pollock winning the Brown Bowl for the second time. A wonderful achievement indeed. Arden is equally at home on still and running water alike and has been a very consistent angler over many years. If he were a Mr. Men character, He would be Mr. Laid Back. Arden now joins Toby Bradshaw as Irish Anglers who have won the Brown Bowl twice and who is to say he won’t stop at two!. Back to the Hotel and time to get scrubbed up for the presentation of the trophies and medals and time for the celebrations to begin.

First of all, Martin McGorian for His outstanding leadership in the preparation and during match week. To the Team, all I can say it was a privilege to be Your Team Manager. You all gelled together perfectly and helped and inspired each other all week. You all walked Your talk and an old ghost has finally been laid to rest after 22 years. To Noel Farrar, ITTFFA Youth Officer and Youth Coaches, Sean Dempsey and Francis Rafferty for the invaluable information and tactics which You gave us after the Youth’s own victory on Menteith. To Quint, Douglas, Connor and Elma at Menteith You did a fantastic job as always. What a fishery and as was mentioned during the after dinner speeches Ireland, England and Wales would love to have such a superb fishery on their doorsteps.

Thanks to Michael Callaghan and Stan Mc Keon for their help during the week. Thanks also to the Hotel and matchday Boatmen. Ian & Eleanor Campbell for a superb job as always.

To The Scottish Committee and Tom McTaggart and George McKenzie for organising and hosting the International.

To Our Bus driver Sean Lally who looked after us and ferried us about all week in a thoroughly professional manner.

Last but not least, Our Team Sponsor, Dave McBride of Southside Angling who so generously sponsored Our River’s, and Lough Style Teams clothing in 2019. I cannot thank Dave enough for putting his money where His mouth is. It is greatly appreciated by all.

Hope I have not forgotten anything. Looking forward to 2020 and the next match which is at home on Lough Melvin. 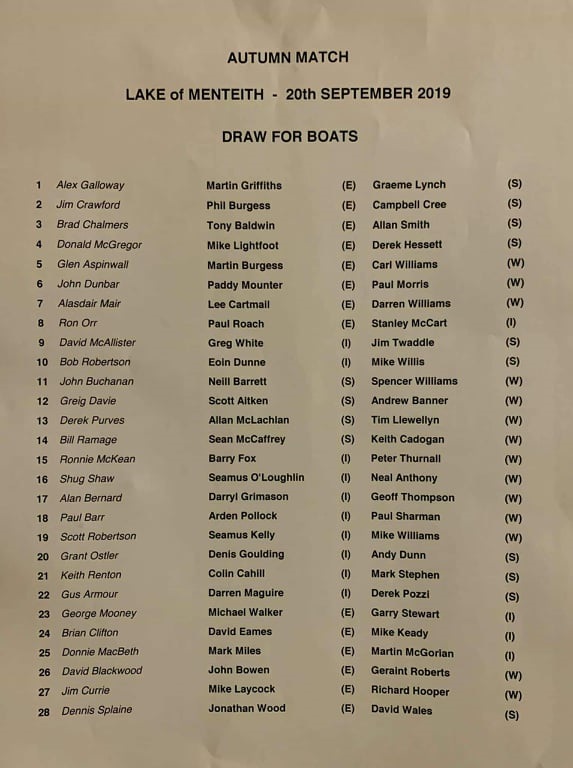 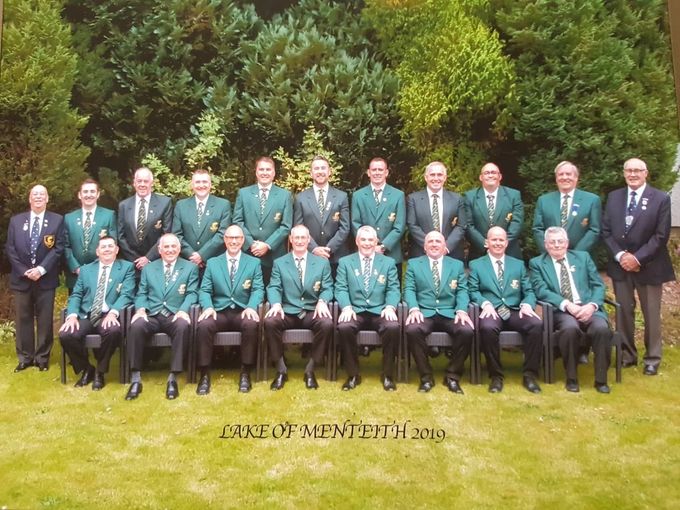 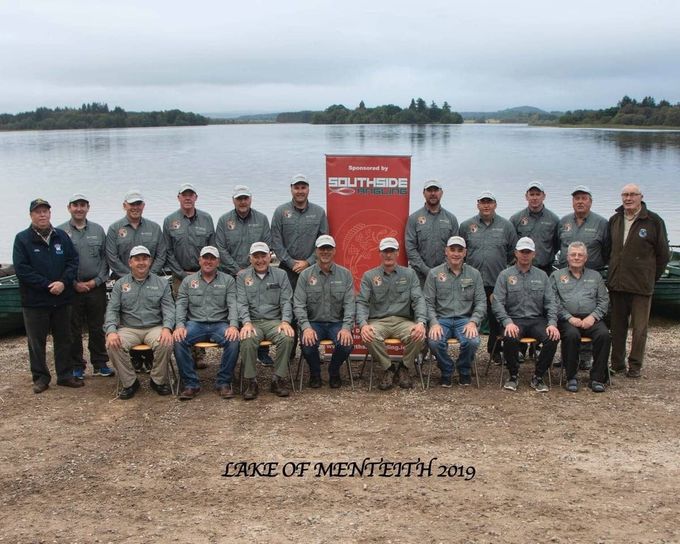 Stanley McKeon Honored by being elected as IFFA Preseident for 2020 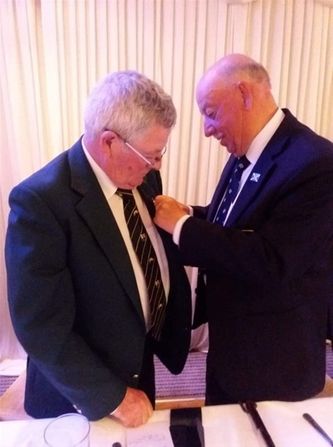 Not only did Ireland win the Autumn International but it was a great occasion for another reason. Stanley McKeon took over from George MacKenzie as the IFFA International President.

On behalf of the ITFFA , i would like to wish Stanley McKeon a wonderful year in office, an honour he so richly deserves. Congratulations again Stan. 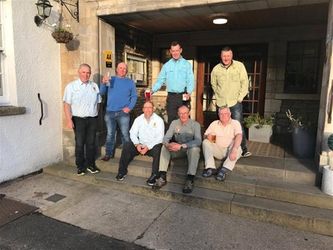 I will be doing a blog on the Match, methods , flys and the ups and downs of every match. We had great fun, but the rewards were due to a lot of hard work by all team members, a never give up mentality meant we ground out the result.

Truely a week to remember.

Well done to all involved