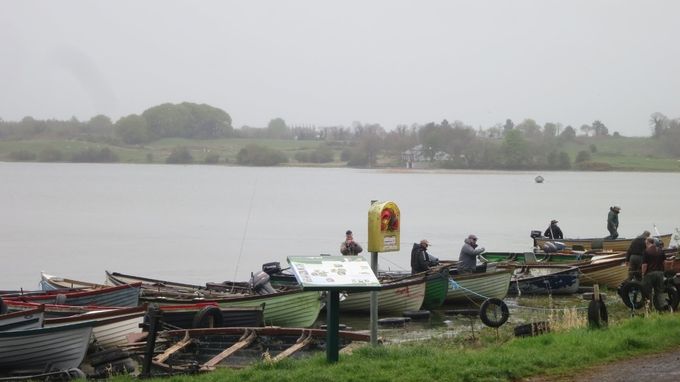 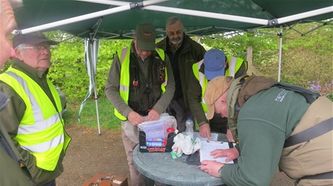 On the 28th of April the Corcoran Cup was held on Lough Owel. Unfortunately  I had not got time to practice prior to this event due to other commitments, but I was very happy when I drew Local Angler Colin Cahill. I have fished with Colin twice in the past, we both represented Ireland in 2015 on the Lake of Menteith where we spent a most enjoyable practice session on the lake prior to the International match day. The other time we fished together was when we fished against each other in an I.T.F.F.A Flextec event on Lough Lene in Collinstown. Colin is an exceptional Angler and has qualified for his Country at Junior and Senior Level several times. Colin grew up in the Midlands, where his Father Jimmy Cahill taught Colin his trade on the surrounding lakes. Colin knows Lough Owel extremely well so I looked forward to a day in the boat with him. 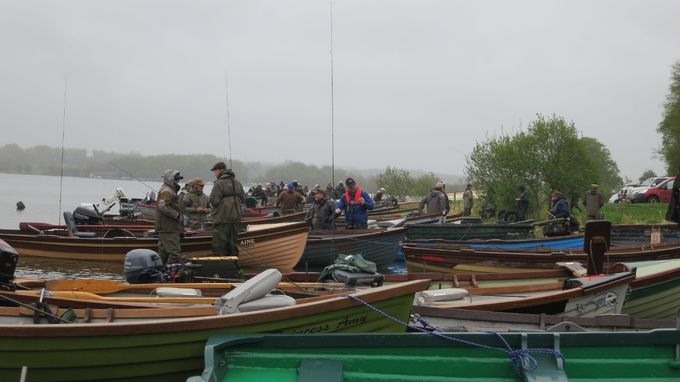 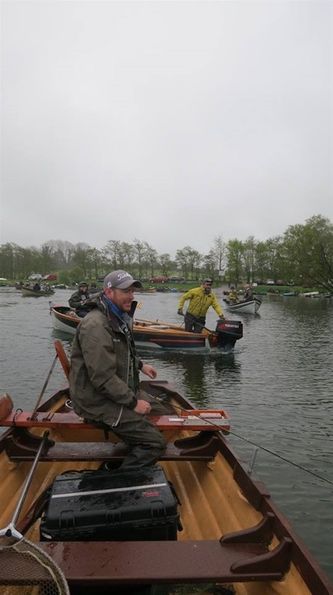 The competition was held from 10am to 6pm, Leinster Chairman Noel Shiels and Stan McKeown were on hand to take sign ins, all competitors were given rules and scorecards and almost everyone turned up on time, well you always have one straggler.

The boats set out at 10am and headed for their desired areas, I was happy enough for Colin to go where he wanted, but I assured him if things were not going to plan we would move, as i know a little about Lough Owel myself. It was a calm overcast morning but you knew it was still spring as there was a cold bite in the air.

As we pulled up to the Graveyard, a known area for Olives and normally a good spot to start , there were lots of boats behind us in Dolans Bay, second thoughts started to creep into my head as Dolnas Bay gets a huge hatch of olives. There were also boats dotted along the shoreline in front of us and a few boats hanging deep off the kettle. I started with some dry olives as there were good hatches on the lake over the last few days prior to this match. After about 20 minutes and no sign of olives or fish , Colin moved the boat out into deeper water,  I changed to a DI-3 and some wets. Colin was on a DI-5. Without as much as a pull, we moved again down the shoreline. DJ Byrnes was repeating the same drift again , so we pulled alongside but out deeper. It did not take long and we were into fish, unfortunately the fish were all around 13.5 inches to 13.75 inches. The competition was run on a 14 inch limit , where you killed your first two over 14 inches and then recorded every other fish over 14 inches you caught on your score card and then released the fish. We repeated the drift again, to see if we could catch some bigger fish. Lough Owel has been very good to me over the years and I basically use the same fly’s when pulling throughout the season. I had a silver Daddy on the top dropper, a yellow stimulator on the middle dropper and a white cormorant on the point. The majority of the fish In the lake are stocked triploid browns, but there are a number of wild fish in the lake and some very big ones. These fish are known to feed heavily on stickleback, even when fly hatches occur on the lake. 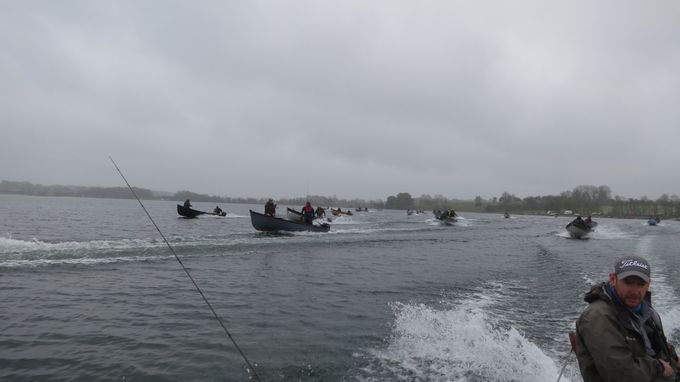 Action on drys but was it the right move 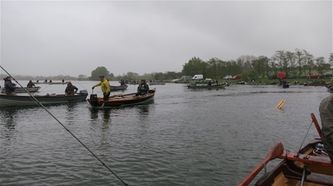 Conditions were nice , overcast and a good ripple. Trying to tempt the triploids sometimes means going up and down in  the water columns trying to find out where the fish are using various lines. But in the water we were fishing, maximum 10-12ft , I like using a DI – 3  line to search through the water. Slowing down your retrieve gets you deeper and speeding up your retrieve you can fish in the top 2 foot of water. I decided to fish deep  and figure of eight the line back slowly , at the end of my retrieve i always hang my flys close to the boat.  On my second cast  everything went solid as I hung my flies, i had a double hook up, two fish were quickly boated but neither of them measured. Both Colin and i stuck to our guns to try and get some measureable fish and at lunch time I had three keepers and Colin had one. We had boated about 12 fish including three double hook ups before lunch, but we could not get numbers of the larger fish.

We met James Fegan and Pat Noonan at lunch, James had 2 keepers and 6 on the card and Pat had two. Amazing fishing by James and he looked on course to win another Leinster title. Looking out from the shoreline I could olives starting to hatch and fish immediately started to rise. The wind was also dropping, ideal for the dries. After Lunch, Colin and I stayed in the same area and continued on our sinking lines, Colin switched to an intermediate, but shortly after lunch and I switched to dry’s. That was a huge mistake on my behalf, although I did pick up 2 fish quickly on dry’s which were keepers, I should of thought about what i was going to do a bit longer. The Olives were hatching all over the lake, to be honest I never seen such a strong hatch on Lough Owel ever before. Fish could be seen taking them all over the area we were fishing, but I did not see many rods bent. They were on nymphs. The fish feeding on the surface were taking one fly then disappearing for 20-30 feet and then taking another. The hatch was so intense that you were casting your dries out into 20-30 olives in front of the boat. Colin had also changed to dries and I gave him an olive emerger I had just caught my fish on. Soon enough he was into fish but again he was very unlucky, they didn’t measure.

I spent way to long on dries without success so I switched to a washing line of sorts with a dry olive on the point and two olive nymphs on the droppers. On my second cast with this method my rod hooped over and I was into my 6th fish. Two more takes resulted in nothing and again I persevered too long with this method. Eventually I went onto straight lining olive nymph’s. Colin had picked up 2 more keepers and released several more on a parachute  dry on his top dropper, the fish were now ignoring the emerger and were on the adult olive. I did get one more fish on the nymphs and another tentative take but I just could not keep fish coming to the boat. I resorted to the bung for the last 10  minutes which proved fruitless. i was clutching at straws at this stage. We ended up with 10 keepers in the boat between us , but we caught 28  fish between us , Colin landed 15 and I had 13, he was just unlucky with the size of fish he caught. I was lucky to manage 7 measureable fish for the day.

In hindsight I think I did things backwards, I should of started on wets, then onto the bung,  then straight ling and then on the washing line and finished on dry’s when the fish were on adults. But as we all know hindsight is a great thing. 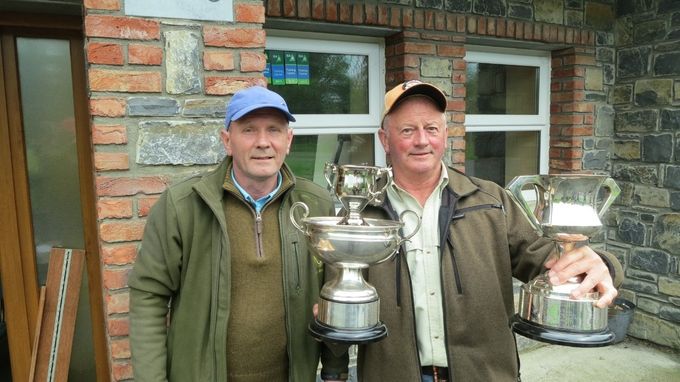 Mick wins the Corcoran Cup for the 5th time

Mick Mc Cormack wins the Leinsters for the 5th time 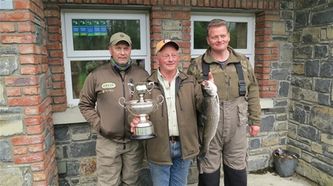 On the shoreline  rumors were that D.J Byrnes had 10, Mick McCormack had 9 but had a good fish to weigh  and James also finished with 9. It was all down to the scales..

Congratulations to Mick Mc Cormack on winning the Corcoran Cup on Lough Owel. Mick also won the Cup for the heaviest trout with a fish of just under 4lbs. Daniel J Byrnes was second and James Fegan was third. There were 14 places up for grabs on the day and I was happy enough to come 7th on the day..  Colin and i had pre-qualified from matches the year before for the Leinster Team, but we all want to win the Leinsters, pre- qualified or not. I look forward to fishing with Colin again as we both made the Autumn Team for the International which will be fished in Scotland in September. Thanks again Colin for a great day on the water

Many thanks to the Lough Owel Club for allowing us to fish their water and for organizing the competition in conjunction with the Leinster committee. Also thanks to the IFI for allowing the use the club house. A huge word of thanks to Leinster Chairman Noel Shiels and to Stanley McKeon for all their hard work leading up to the event, finally thanks to Brendan Murray for organizing the food.There was a huge hatch of olives on the day better than I have ever seen on the lake. With fish rising everywhere from 1.30pm on. Switching between wets and dry’s. Seemed to be the trick. But talking to Mick afterwards he stayed on wets for the day. Mick has now won the Corcoran Cup 5 times, an amazing achievement.A great day was had by all and best of luck to all the qualifiers in the Interprovincial on Lough Lene Killarney in September.

the reponse to my Blog has been very good, but i would be grateful if you like the blog  that you might click on the like button and also leave any comments regarding what you would like to see in my Blog in future. Like methods , fishing trips, New Lakes, fly’s , fly tying, new products on the market etc and any comments on the blog you just read. it helps me write a more interesting blog for the readers .

Super blog Denis, very well composed , also giving a great read and indeed a great insight into the sport of fly fishing for a beginner Stan

Great read as always Denis great blog looking forward to the next one, what I would like to see at the end of the page is the fly pattern used on the day & what is the best mothod to used themRob

Good commentary on the event