Its Spring time and there is a Buzz in the air 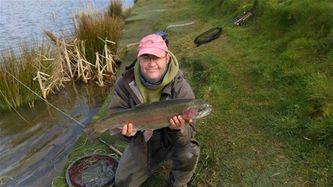 Well i had thought that my small water fishing had come to an end as the rivers and Loughs had once again opened. A harsh cold snap and snow had put paid to that, the Liffey was in flood and i wasnt going to go out in a boat to freeze m'y preverbiales off.

Courtlough was the venue i decided on while i tied a few patterns at the breafast table. Yes quite mad, but Andrea and my kids are quite used to me at this stage. When i arrived at the venue, the wind was blowing hard straight down the lake, but i could see some trout rising close to the bank. With two floating lines set up, one with a dry fly set up and the other with a washing line set up ( 2 buzzers and a black booby) i headed down the lake where the wind was blowing into. Its a big mistake to choose comfort when going to a small stillwaters, 90 percent of the time the trout will be where the wind is blowing into, as that is where most of the food will be.

On reaching my chosen area i could see small adult buzzers floating along the surface, the trout were waiting on them as they drifted towards the bank. After watching the trout rise for a few minutes i was not so sure they were on adults, but catching trout on drys is always fun especially after enduring the long cold winter with little or no top of the water action.

My dry fly set up on the small waters is quite different than that for fishing the bigger resevoirs or loughs, my total cast will be a tapered 12ft cast down to tippet of 3lb, with a dropper placed two feet from the point fly. The reason i do this as i can lift and drop the drys in front of fish quickly without causing too commotion and having the flies so close together can give the trout two options quickly.  I started off with two cdc shuttlecocks, both black, a size16 and an18. Fish responded quickly and a string of fish came to the net, but i was having trouble keeping the flies floating. Just to make life easier i changed over to a pair of quil sugar cubes. Now they will float all day. The trout sucked them in for a while but i was impatient, not all the trout i covered took. The next trout that i landed i checked his mouth and sure enough there were a few wriggling buzzers.

It was great sport for two solid hours, fish taking the flies as they landed, or by casting up into the wind and slowly retrieving the line back was very effective. The wind was too strong at times to cast with the wind as the the line curved around with the wind and moved the buzzers too fast.

Buzzer fishing is probably the deadliest form of trout fishing, as it is so easy to represent whats hatching and the technique is simple too and relaxing. I caught fish from 1lb in weight to double figures. The best buzzers were all quill bodies with yellow, sunburst or red cheeks, with or without breathers it made no difference.

As i found out the small waters are still producing and if the lakes are rivers are unfishable, well you can fish these waters in most conditions. I had a really enjoyable day catching lots of fish and bumping into old friend and making new ones. Thanks again Garreth for your hospitality.

Next week i will be hopefully on the river, but you never know, most wild and large resevoirs and stillwaters are experiencing buzzer hatches,. Time will tell 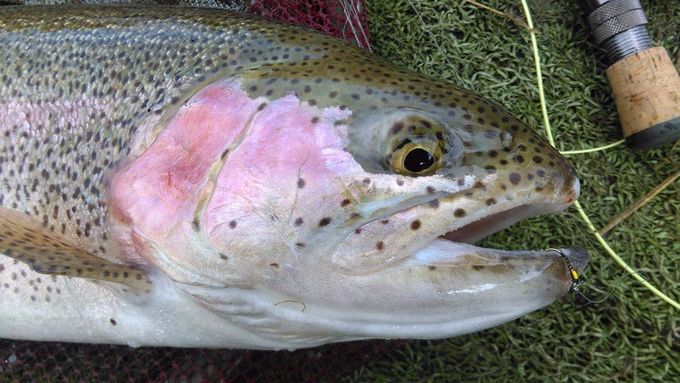 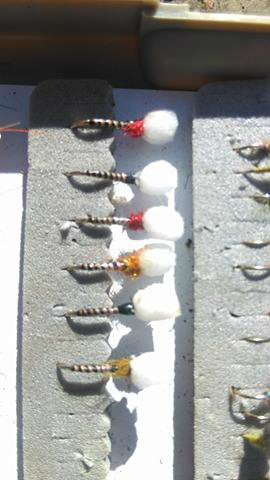