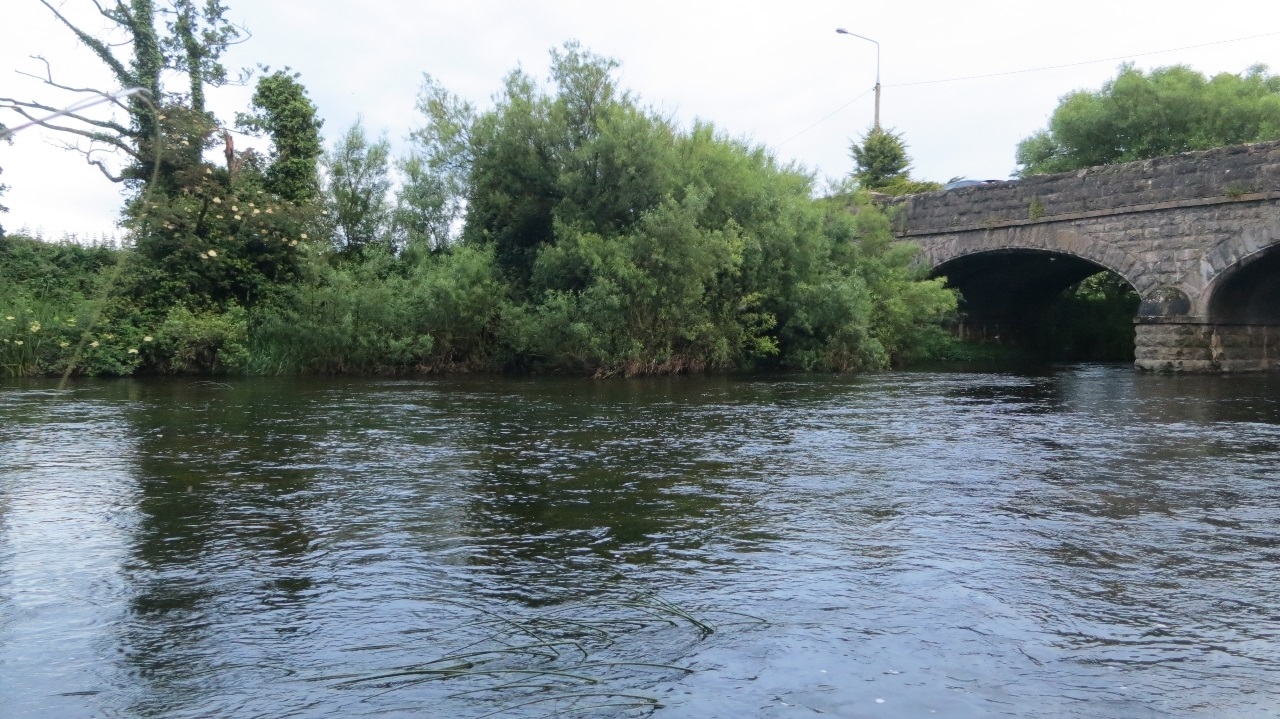 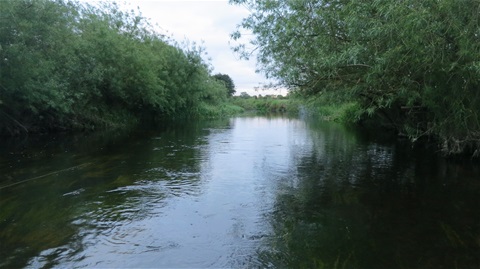 Its June and that means one thing and one thing only, its time to hit the rivers in the evening.

At this time every year when the hatches of the flys on the lakes stop and the fishing becomes hard, i turn to where it all began and head back to the rivers. As a young Angler i was in two minds about fishing the rivers in the evening and into the dark. The strange sounds you heard at night that a lad from tallaght never heard before was a bit daunting to be honest.

The shrieks and bellows of the animals in the distance made my hair stand on end, yes i had hair back then. I remember far too many nights/early mornings up in Ballymore Eustace being chased by herds of bullocks, i jumped over more than a few barbed wire fences in a bid to save my life. I know better now, the bullocks  are more afraid of me than i of of them, stand your ground and they will back off.

All these little things could of scared a young boy from the river, but it never stopped me.  The challenge of catching trout in the nearly dead conditions before the rise, then seeing the river come alive in the main hatch that evening and searching for that elusive lump of a trout that i always believed was there. It was an amazing evening every evening, so much fast and furious fishing all packed into 3 hours fishing.

My father brought me to the dodder first, where i fished worm , minnow and then fly. As i progressed i was brought further a field to the Liffey in Ballymore and then to Clane. I remember waiting for dad to come home from work to see if he was going to go to the river that evening. When he did and said he was going to the liffey near Clane,  i prayed there was enough room in the car for me. The Liffey was a much bigger river than the Dodder, with much bigger trout than what we caught on the Dodder or up in the Ballymore Stretch of the Liffey. It was and still is a great fishery , i only live 20 minutes from ther liffey now and i still frequent the same pools i did 30 years ago and i still chase those lumps i chased as a boy. I have had threes, a four but never a 5lb fish from Clane. These days i know where else on other rivers i could have a better chance of getting one with a bit of effort, but my river stomping ground is where i want to catch one and if i never get one it wont be from the lack of effort. 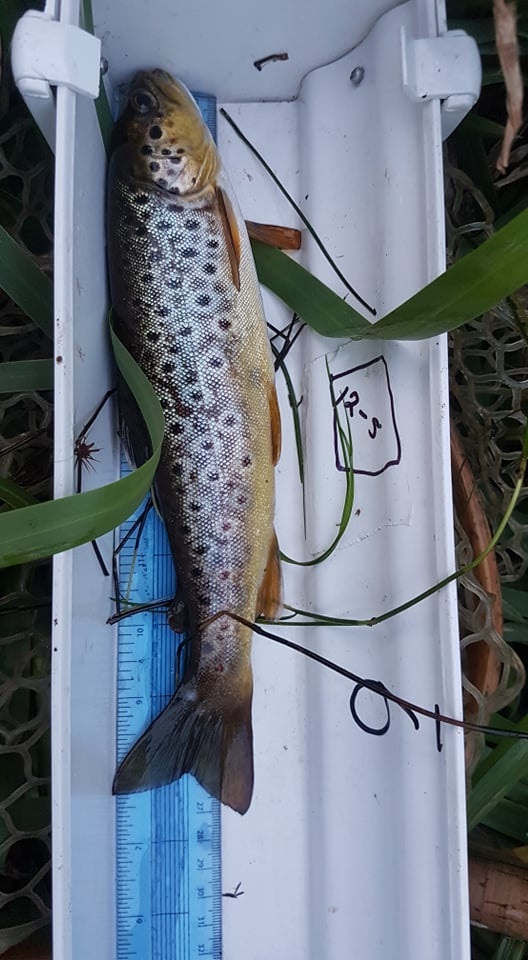 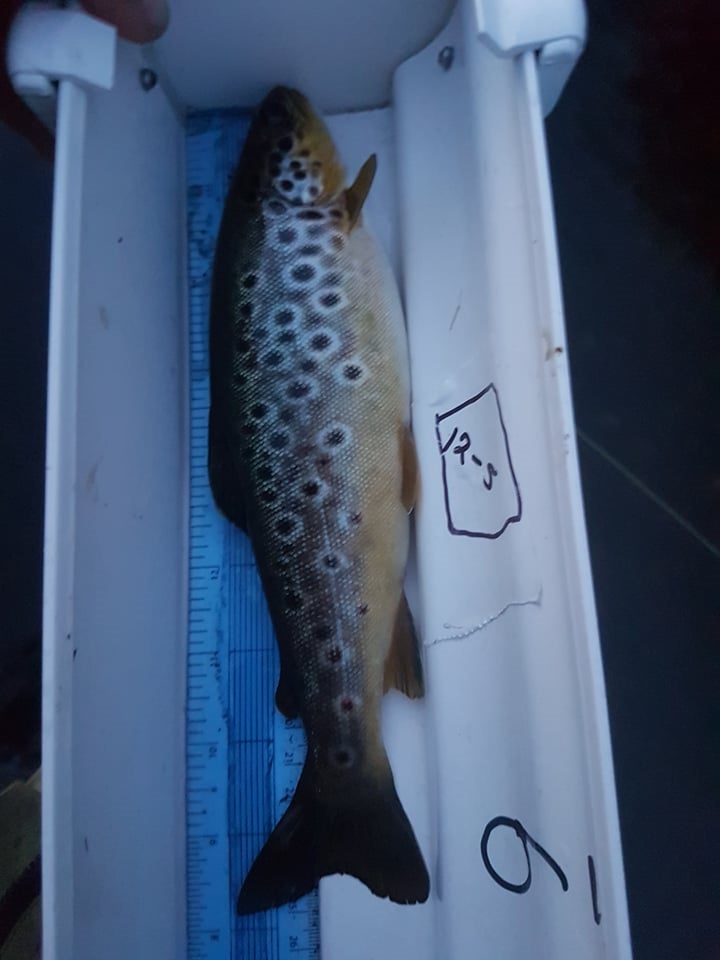 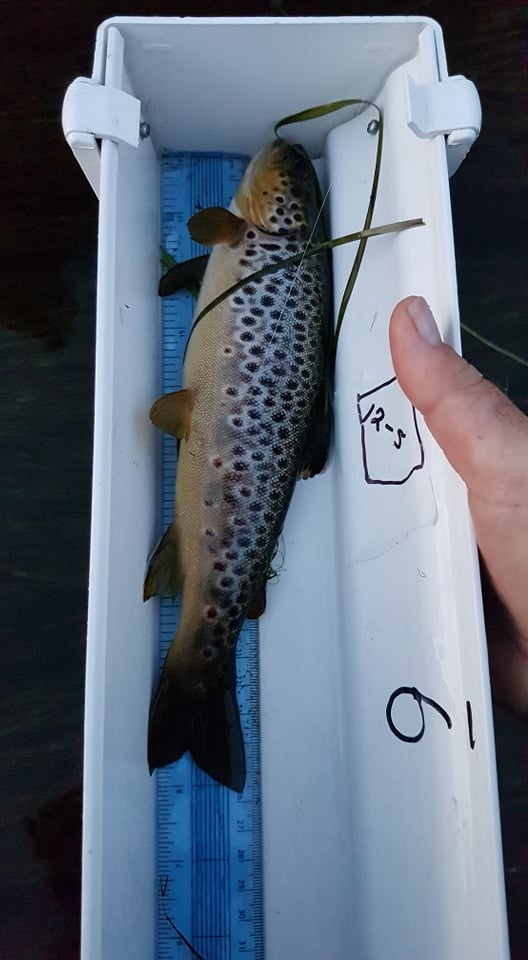 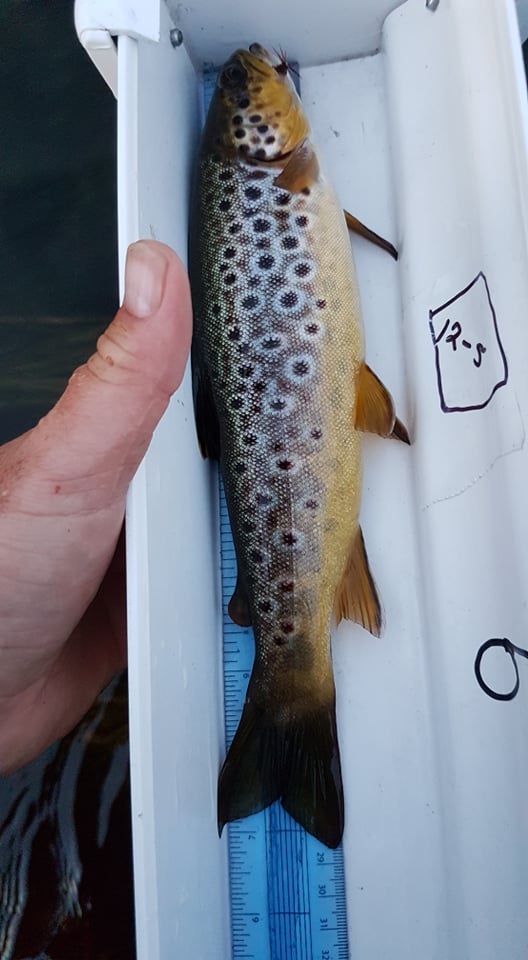 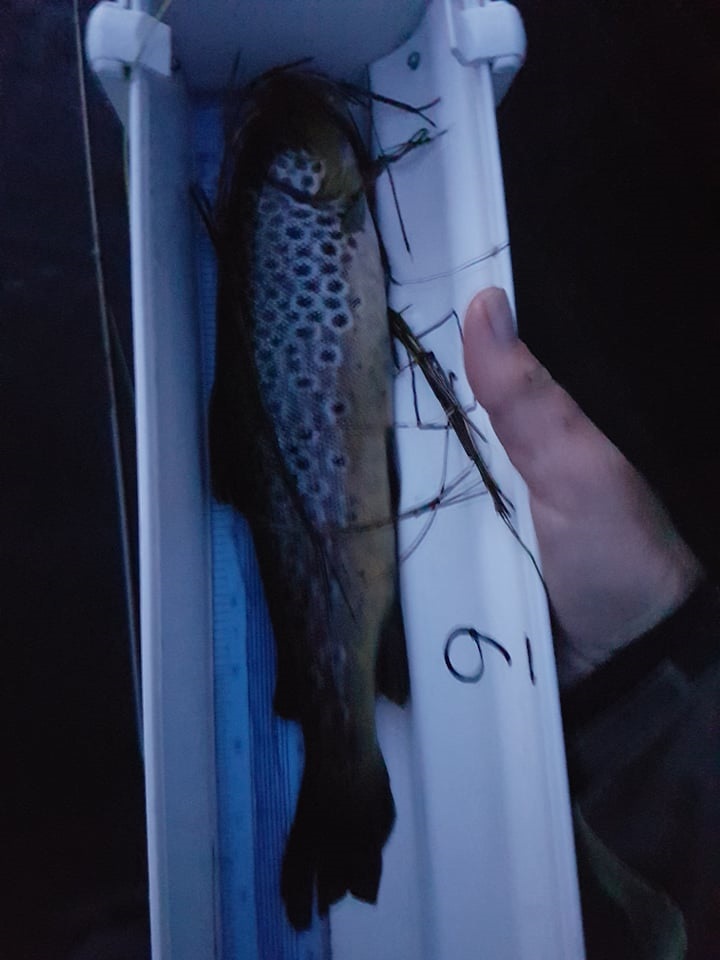 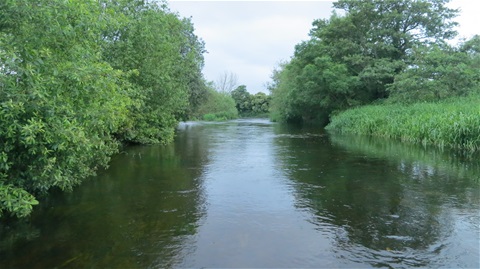 In years gone by it was the done thing to kill fish from the rivers, I have fished many an evening river competition and have killed my fair share of trout, but i am glad to see that things are changing. My local club now fish catch and release competitions as the picture above shows. It is hard to get used to stopping fishing in the middle of the eveing rise to measure and photograph your fish. But its better for the river. Your camera skills really do improove, as u are holding your rod, measure, net, fish and camera with two hands. Sometimes you are not able to make it to the bank and all this has to be done in the middle of a river in the pitch dark. Its awkward but it is the way forward on the rivers. Dont get me wrong, i still eat fish and i do not eat any fish i do not catch apart from a bit of cod or haddock in the winter months.

People are all about c and r now, i can agree yes, we cannot kill fish like we used to as the enviroment is not as healthy as it used to be. Good c and r policys and lowering of bag limits on the rivers are a great sign for the future, But i still think if angler wants to take one for the pot he should be able to do so. 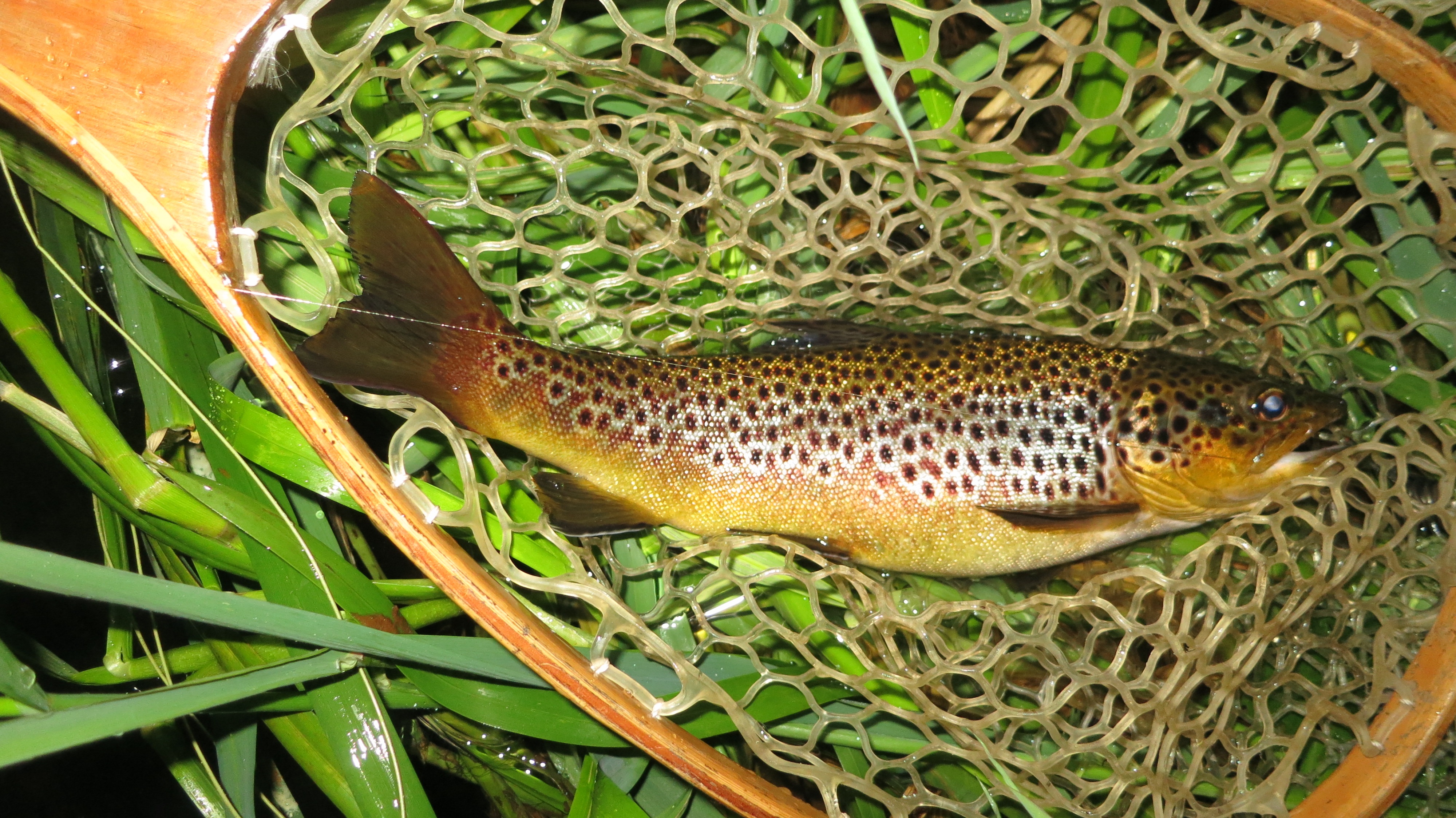 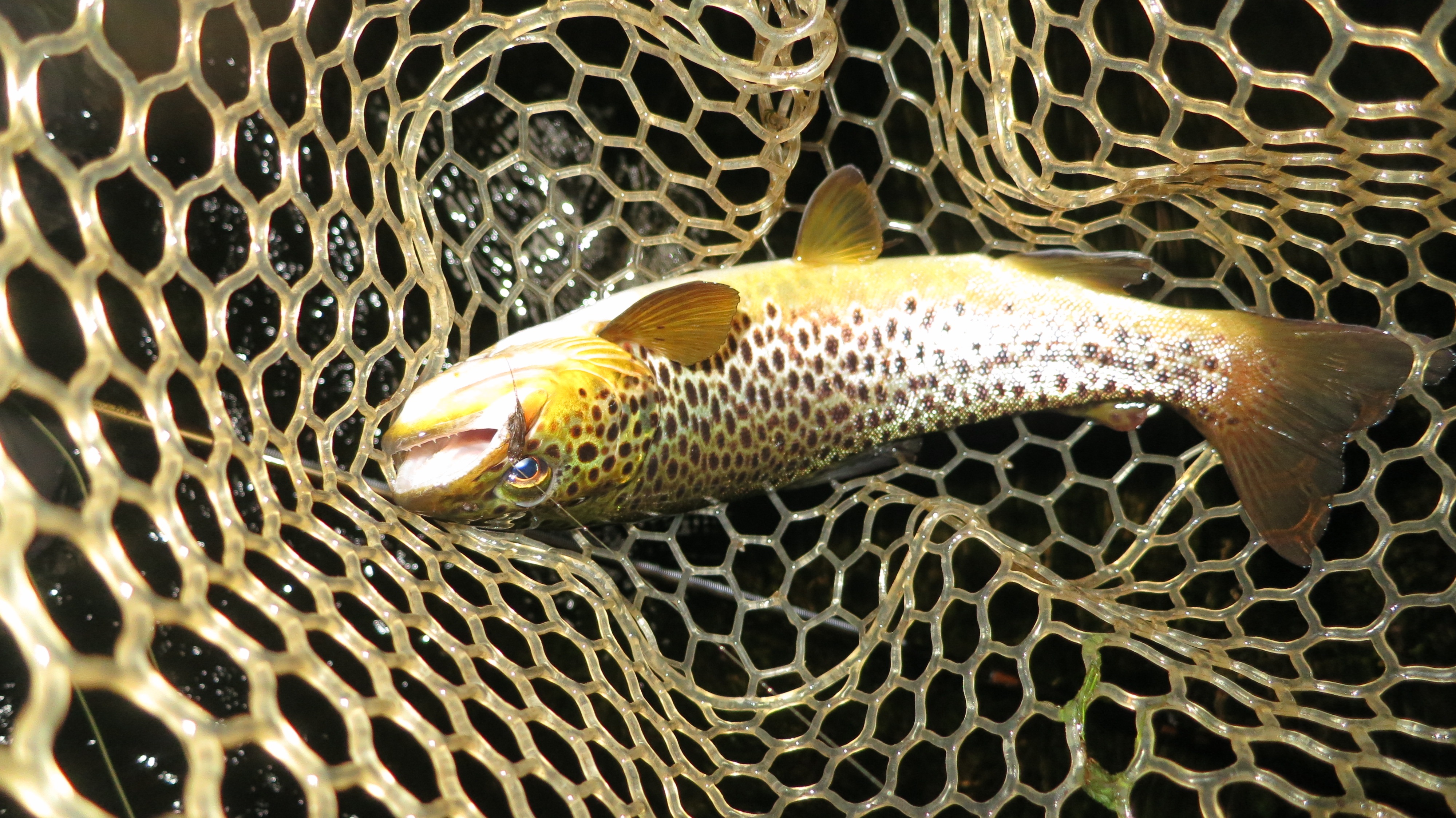 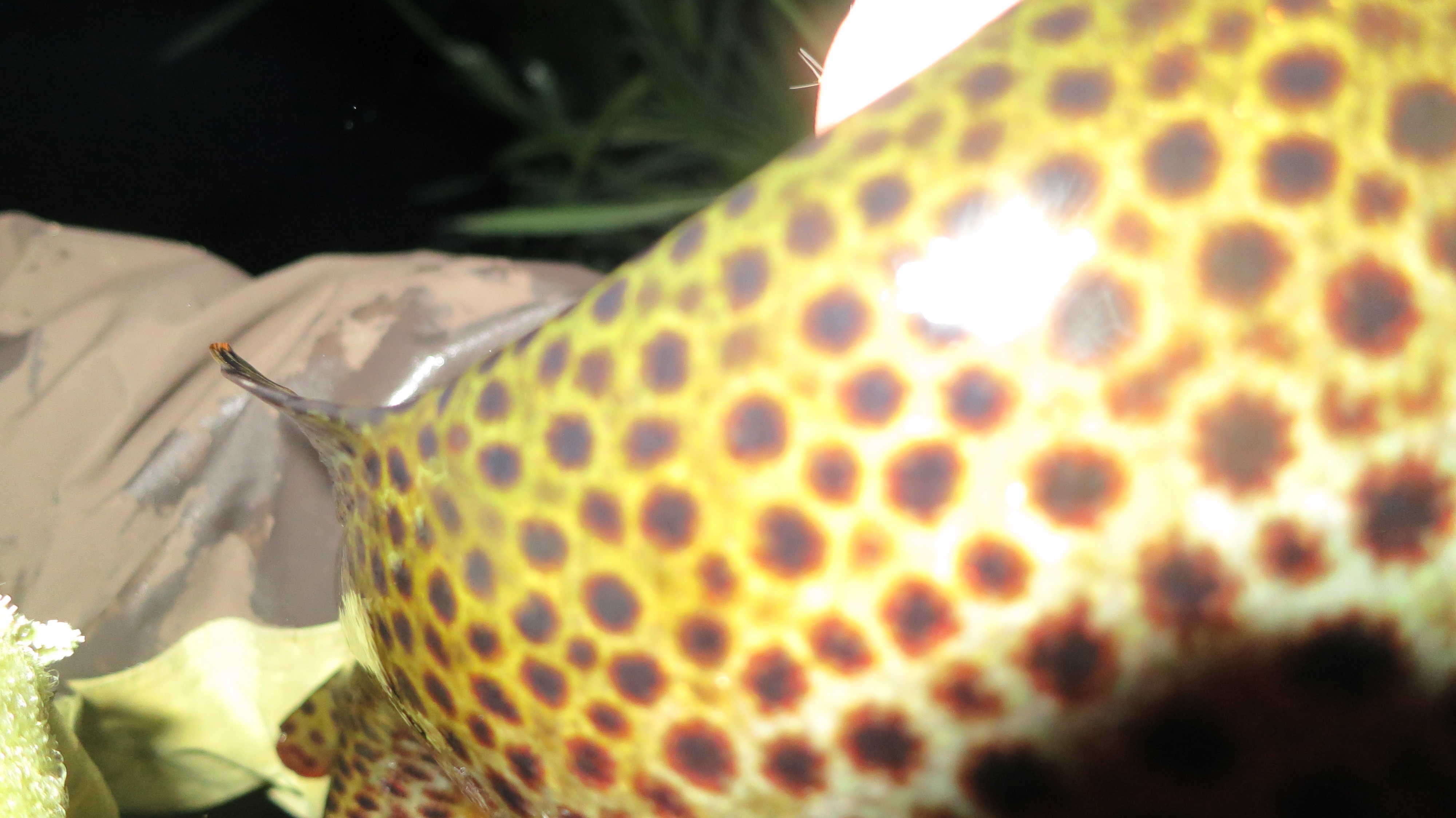 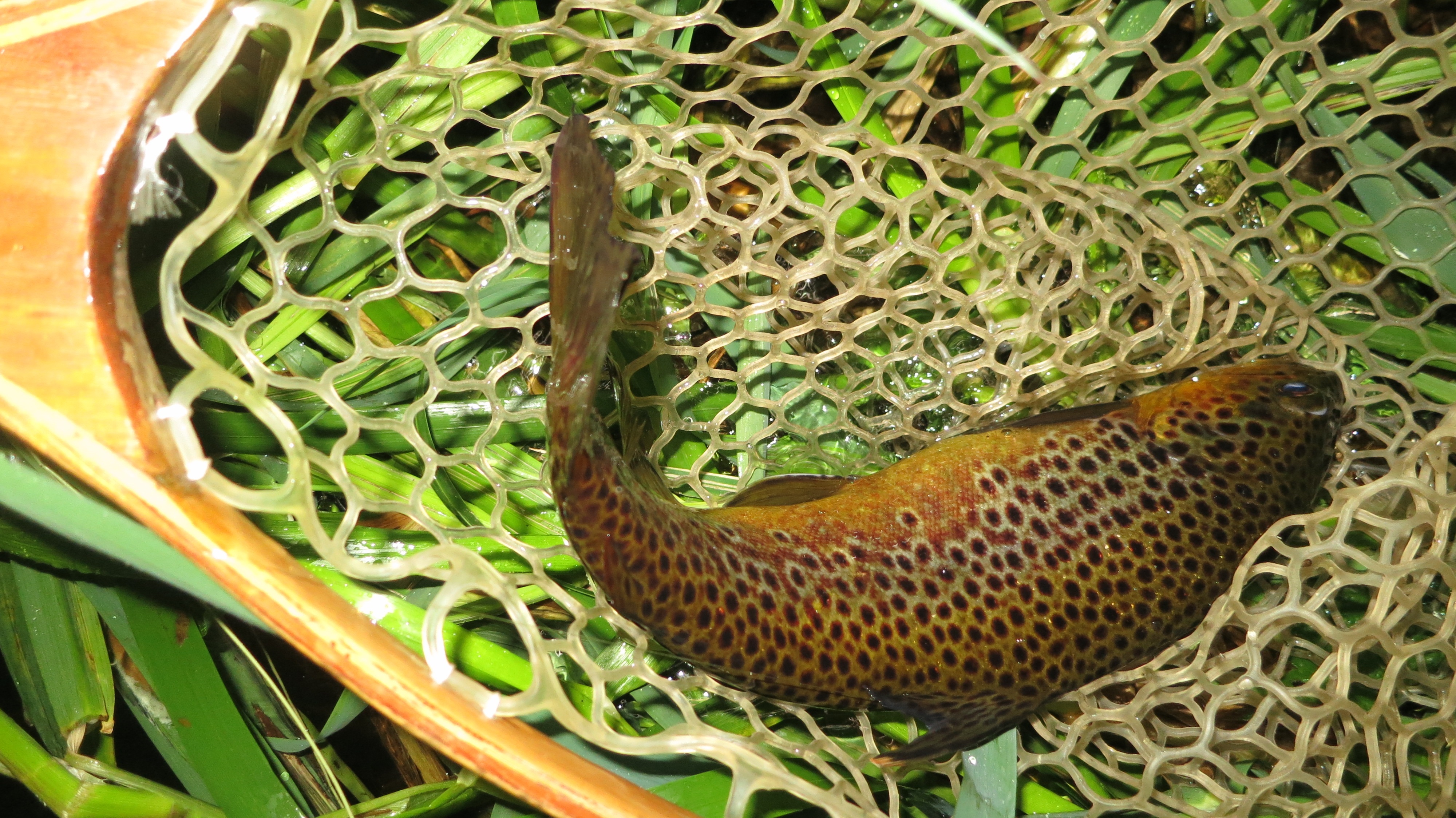 Joy of the Streams

The fact i live close to the rivers is a blessing, The evening rise probably starts at 9.45pm and lasts for about an hour. So i can leave my house at 8.30pm and be home before 11.30pm.  Plus no engine, no big tackle box etc etc.  A rod, floating line, three spools of line to make a tapered leader, 1 box of flys, scissors, floatant and sinkant is all you need. Of course a pair of waders, a trout friendly net and a torch to find your way home is always a good idea.

Often when you arrive the river is dead with an odd small fish rising here and there. But to see how the river comes to life over the next 2 plus hours is definitely nature at its best.

After coming fourth in the last club comp i wanted to explore the river a bit more as i rarely get time to fish the river in the early season. Each year the river changes and new mini pools within pools are made during the winter floods.  A trout of 30 plus centimetres is a very good fish from my local water. There is of course bigger fish and they do get caught and are mostly returned during the season. The first night I went out after the competiton was a disaster as it was very cold and wet. Eill it ever stop raining and When oh when will the sun shine !!!!!!

The second night was no better but i did get to find a few bigger fish, as you can see below my camera skills are not just right yet at night. I also lost a number of good quality fish aswell.

That evening the fish began rising on reed smuts, then they were on olive spinners, then two maybe three different olives hatched and the trout fed on them well. The yellow may dun was on the water all evening , but in small numbers. The fish then went on small sedges and PREDICTABLY went mad for 5 minutes on larger sedges before the fish stopped rising. The fly life has been better this year on the river and that has probably been due to the lack of intense heat that we had last yearr.

It was geat fun trying to work out what the fish were taking in the early evening.  i had a pair of swans that kept a 15 yard distance from me at 45 degrees all along the stretch i fished. If i went up the river they followed , if i went down river they followed. I even got out of the river and crept downstream and they came looking for me. The joys.

Interestingly enough the larger trout were not holding in the same positions that they have done in the past . I know the river was high, as its always raining these days. I covered what i thought were small fish two or three times and i was met with solid resistance from much larger fish.

I do love my river fishing, its not all about the fish. Nature itself unfolding in front of your eyes most evening, Flys hatching and trout, birds and bats feeding on them. The swifts darting to and fro catching insects on the wing, kingfishers thundering as fast as light  past you up and down the river. Dippers doing what they do in the riffles and of course the mink and otters occasssionally paying you a visit. Its a privelege being able to see into this world that very few ever see. As i said its not all about the fish and what you catch. It is just nice to be there.

Next week i will be going through some of the patterns i use at various stages of the rise, none are mind blowing, i will also go through leader set ups and other bits and bobs. Hopefully the weather will pick up and i can leave my fleece, neck warmer, woolly hat and rain jacket at home . We will see what happens in the best 3 weeks of the year on the river.

Tight lines and be safe out there 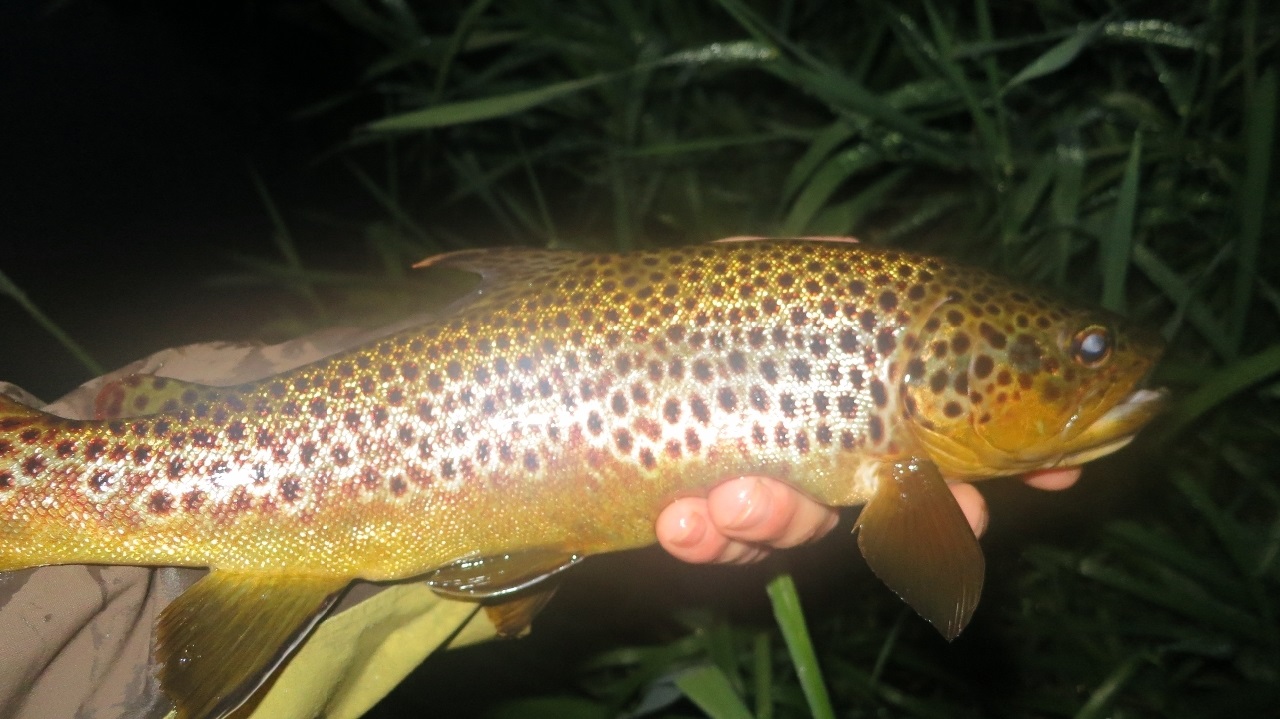 What a brilliant article Denis. Lots of people never get the experience of late evening fishing. To have an otter pass you looking you square in the eye as if saying this is my patch. Great.

Beautiful piece of writing, what its all about

What a great piece, sums up so well the joy of fly fishing despite the blanks and tangles! Tanks for posting

Many thanks, it surely is a joy to be there

Hi Denis hope all is good great read,memories, back in the days I worked in Intel,I spent many a evening in that exact spot on the liffy in Clane actually took some nice photos on the evening in ques

Great to hear from you Mick, hope you are keeping well

Great read Denis.Just back from Ballymore Eustace where Brian McDonagh won the Sonny Crowley shield as you did in 1999

Hi Denis
Good meeting last night, and enjoyed reading your blog. Felt I was on the lake with you. Great work